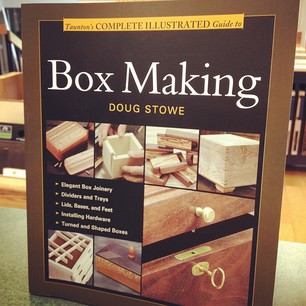 I have been reading this little gem, Box Making by Doug Stowe up at the front desk because (as you all know) a box making project is in my near future.

This is what Doug has to say about boxes, "A wooden box.  What could be simpler?  Yet what could be more profound?  Boxes have become an art form and a way in which thousands of craftsmen express themselves through wonderful works in wood."  And we certainly agree with him here at Sears Trostel; box making IS an art form, something I really need to remember as I embark on this first woodworking design project of mine.

Of course, construction of the box for the end table was something that Harlan and I discussed when I first showed him my plans.  Would I choose to use a rabbet joint?  A mortise-and-tenon joint?  Would I dare attempt a mitered joint?  And by the way, what do all these terms mean?

Most of you are already probably pretty familiar with the different techniques used in woodworking to join two edges, but let me share with you briefly what I have learned.  The diagrams I have drawn are representations of what the front of my end table would look like should I choose that specific joint.  For my purposes any of the joints would work well, it is merely a matter of aesthetics.

Rabbet Joint:
A rabbet joint denotes a cut or groove along the edge of a board , which creates a mechanical joint that is stronger than a butt-joint and allows for a surface area to glue your joining edge.  Often these joints are reinforced with fasteners (nails or screws). 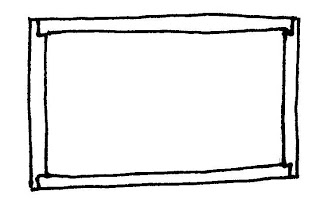 unlike a "rabbit" joint, this one won't hop around

Mortise and Tenon Joint:
This is the primary woodworking joint, which has been used for billions of years by woodworkers (according to my co-worker Steve). This joint is made up two components: the mortise hole and the tenon peg. The tenon is meant to fit snugly in the mortise hole.  They are typically strong because of the increased glue surface area and because of the mechanical connection.  There are many different methods to make mortise and tenon joints.  Our favorite tool at Sears Trostel is the Festool Domino, which is a specialized mortising machine that is user friendly (good for a beginner like me). 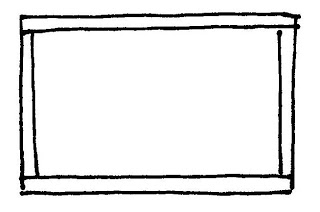 Looks like a butt joint!  But it's not a butt, it's a mortise and tenon!
Miter Joint:
A miter joint is a joint created when the two edges being joined are beveled (usually at a 45 degree angle).  These edges are then glued together but because the grain in a miter joint is a combination of end and long grain, the glue bond is "less than ideal", resulting in a relatively weak joint.  Typically, mitered joints are best used for smaller applications (think picture frames and small boxes).  Mitered joints, like rabbet joints, are often reinforced with fasteners. 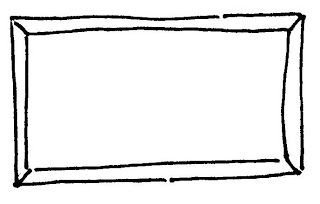 Let's pretend I used a ruler

However, because we are also interested in aesthetics... I will say that this is my preferred joint for the end table that I am making.

In conclusion, I hope this has been informative to all you (10) loyal readers out there.  Hi Mom!  If you want to learn more about box making, come buy this book or just ask me, the new expert on all things box related.